A psychiatric service dog (PSD) can provide much-needed support to people with psychological disabilities, improving their quality of life significantly. Due to the profound positive impact a PSD affords, these loveable working animals receive legal protections through various federal and state laws.

The most prominent federal law regarding service dogs is the Americans with Disabilities Act (ADA), which covers these highly trained creatures in numerous ways.

In this post, we’ll discuss the specific protections the ADA provides. Then, we look at other relevant laws, both federal and state, to help you better understand your rights.

The ADA is the most comprehensive civil rights law for people with disabilities—physical, psychiatric, or neurological—living in America.

Since first being signed into law back in 1990, the ADA has been amended twice, once in 2008 and again in 2010. The latter amendment gave people with disabilities the right to bring a trained service animal into almost all public accommodations, albeit with some exceptions and conditions.

Before we delve into the numerous protections the ADA affords, it’s worth obtaining an in-depth understanding of precisely what a PSD is—or, more importantly, how the ADA defines it.

The ADA considers a service dog to be a dog that is “individually trained to do work or perform tasks for people with disabilities.”

Under the ADA, a PSD receives the same legal protections as any other service dog, including seeing-eye dogs or canines that assist people with physical impairments. So long as a PSD has been individually trained to assist its handler with a psychiatric disability, it qualifies as a legitimate service dog under the ADA.

Nor is there an ADA requirement for a service dog to perform multiple tasks—one disability-related task is enough to qualify.

Therefore, if you have an eligible psychiatric disability and have trained your dog to perform at least one disability-related task, the animal is an ADA-recognized PSD. As a result, it will receive all the relevant ADA protections.

In essence, two key factors determine the legitimacy of a PSD

1. Eligible Psychiatric Disabilities Under the ADA

For the ADA to cover a PSD, the handler must have been diagnosed with an ADA-recognized disability.

The ADA covers all psychiatric disabilities listed in the American Psychiatric Association’s Diagnostic and Statistical Manual of Mental Disorders (DSM–5).

These include, but are not limited to:

This list is not definitive; the ADA and APA-DSM cover many more psychiatric disabilities.

A qualified psychiatrist must diagnose the disability to ensure eligibility. However, an establishment cannot ask you about your specific psychiatric disability or request documentation to verify the condition.

According to the ADA, a service dog must be “trained to take a specific action when needed to assist the person with a disability.” Furthermore, “the task(s) performed by the dog must be directly related to the person’s disability.”

A person with a psychiatric disability can train a PSD to perform numerous tasks, including:

Again, this isn’t an exhaustive list. PSDs can perform a wide range of tasks to help with various psychiatric disabilities.

The core requirement is the animal has been trained to perform a specific task(s). 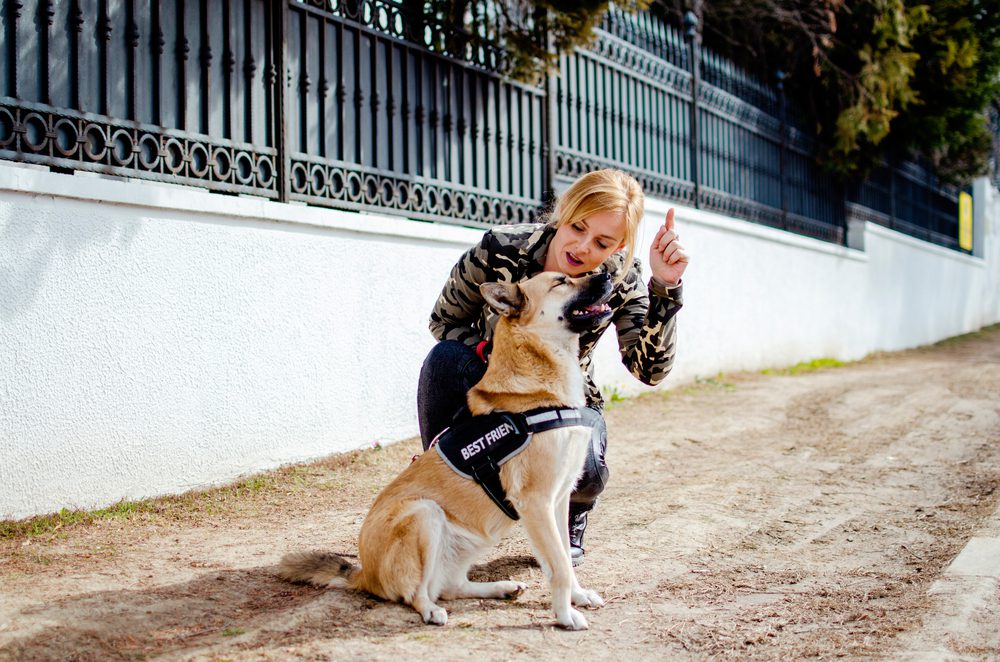 It’s crucial to understand that PSDs differ from therapy dogs and emotional support animals (ESAs) in their training, tasks, and legal protections.

The ADA does not cover ESAs or therapy dogs, although these animals receive some protections under federal and state laws.

A PSD, as we know, has received individual training to perform specific disability-related tasks. An ESA, on the other hand, provides emotional support through companionship and doesn’t require training.

If, for example, the mere presence of your animal helps keep you calm during an anxiety attack, it would be an ESA rather than a PSD. If you’ve trained your dog to detect a panic attack and initiate tactile intervention, the animal classifies as a PSD rather than an ESA.

A therapy dog is entirely different. This animal undertakes a moderate degree of training and may attend places like schools, hospitals, and hospices to comfort vulnerable people.

Public Accommodations and the ADA

A public accommodation refers to any venue or area, either public or privately owned that grants access to members of the public.

This list is not exhaustive; there are many more places you can bring a PSD. If a place or venue grants access to the public at large, either for free or via paid admission, you most likely have the right to take a PSD there.

Some places and organizations are exempt from ADA protections, thus aren’t legally obliged to allow access to a service dog.

Faith-based institutions such as churches, synagogues, mosques, and temples have the right to choose whether to permit service dogs.

Under the ADA, a public accommodation is not allowed to deny access to a service dog nor charge the handler any extra fees. Further, the handler and dog may not be forced into a designated section or treated differently in any way.

In addition, staff at a public accommodation cannot ask the handler to provide documentation to prove their disability or the authenticity of the service dog. A person with a disability may only be asked two questions:

A public accommodation cannot ask the handler to demonstrate the dog’s training.

While a person with a psychiatric disability can bring their PSD into most public settings, the animal must comply with several conditions.

Must Not Exhibit Disruptive or Threatening Behavior

If the service dog exhibits any threatening or disruptive behavior, the establishment can ask the handler to remove the animal from the premises. The handler must be allowed to return to the premises without the animal if desired.

Common examples of threatening or disruptive behavior include:

A public accommodation cannot deny entry to a service dog if they suspect the animal will behave in a disruptive manner. However, the establishment can ask the handler to remove the dog from their premises if the animal behaves disruptively and the handler cannot control it promptly.

A service dog must be housebroken to enter a public accommodation.

If a service dog urinates or defecates in an establishment, the public accommodation can ask the handler to remove the animal. The handler may also be liable to pay for any damage a service dog may cause, including the cleaning costs associated with urination and defecation.

A public accommodation has the right to deny entry to or remove a service dog if it causes a significant health and safety risk.

A person with a psychiatric disability can bring their PSD into a communal dining area, such as a food bank or restaurant salad bar because its presence wouldn’t pose a significant hygiene risk. However, bringing a PSD into a hospital burn ward wouldn’t be allowed because the animal would pose a considerable hygiene risk in this highly sterile environment.

In addition to the ADA, each state has its own laws that protect the rights of people with disabilities and their service dogs. Some state laws differ significantly from the ADA, while others are essentially the same. In any case, a person with a disability can choose to apply whichever law grants them the most protection, be it state legislation or the federal ADA.

It’s worth noting that the state police and judicial systems are only authorized to deal with state laws. Therefore, if a public accommodation violates the ADA but remains compliant with state law, state-level authorities would be powerless to intervene. In this situation, the handler would have to file a complaint through the Department of Justice or a Federal Court.

It’s worth researching your rights under both the ADA and the state in which you live. By being well-informed, you can better protect your rights and travel confidently with your service dog in tow.

Although the ADA is the primary legislation protecting service dogs in America, other federal laws offer unique protections.

The Air Carrier Access Act gives a person with a disability the right to travel with a service dog in the cabin of an aircraft without paying any additional fees.

If booking air travel more than 48 hours in advance, the traveler must fill out the US Department of Transportation (DOT) Service Animal Air Transportation Form and submit it to the airline. When travel is booked within 48 hours of departure, the traveler may complete the form at the airport. In addition, flights over eight hours in length also require a DOT Service Animal Relief Attestation Form.

During the flight, the service animal must not:

If the service dog sits on the handler’s lap, it should be no larger than a two-year-old child. Furthermore, a service dog must be over four months old at the time of travel.

See our article on traveling in a plane with a PSD for more information.

The Fair Housing Act mandates that “no-pet” clauses in rental contracts do not apply to PSDs accompanying a person with a psychiatric disability.

Section 501 and Section 504 of the Rehabilitation Act prevent employers from discriminating against a person with a disability accompanied by a service dog.

An employer may not fire or refuse to hire a person with a disability due to their service dog. In addition, an employer must make a reasonable attempt to accommodate a service animal in the workplace.

However, if the presence of a service dog creates undue hardship (it requires constructing expensive new facilities or poses a significant health and safety risk), the employer is exempt from these rules.

These sections of the Rehabilitation Act only apply to businesses with 15 or more employees. Smaller companies are exempt.

Psychiatric Service Dogs and the ADA: Understanding Your Rights

The ADA considers a PSD under the same terms as any other service dog, thus granting its handler an array of useful protections.

By understanding your rights and obligations as stipulated in state and federal law, you can confidently bring your PSD into almost all public accommodations.

This website uses cookies to improve your experience while you navigate through the website. Out of these cookies, the cookies that are categorized as necessary are stored on your browser as they are essential for the working of basic functionalities of the website. We also use third-party cookies that help us analyze and understand how you use this website. These cookies will be stored in your browser only with your consent. You also have the option to opt-out of these cookies. But opting out of some of these cookies may have an effect on your browsing experience.
Necessary Always Enabled
Necessary cookies are absolutely essential for the website to function properly. This category only includes cookies that ensures basic functionalities and security features of the website. These cookies do not store any personal information.
Non-necessary
Any cookies that may not be particularly necessary for the website to function and is used specifically to collect user personal data via analytics, ads, other embedded contents are termed as non-necessary cookies. It is mandatory to procure user consent prior to running these cookies on your website.
SAVE & ACCEPT